New to jenkins-debian-glue? Please check out Getting Started before digging deeper into the docs.

Create a new Jenkins job for your own Debian package

Do not forget to adjust the repository URL accordingly for your own package:

Do not forget to adjust all references to jenkins-debian-glue-* in your new Jenkins jobs with your new jenkins jobs!

Trigger Jenkins builds when pushing changes to the repository

Once you're happy with the way your Jenkins jobs work you usually don't want to click on 'Build now' manually whenever you want to trigger the build process. Instead let's build Debian packages whenever changes are pushed into your repository.

To avoid polling for updates in VCS trigger the build remotely from your version control system:

You might want to build your Debian package based on a specific branch. For Git you could hardcode the branch(es) inside the 'Branches to build' setting. But you are much more flexible by using parameterized builds. Depending on whether you use Git or Subversion adjust the Jenkins job accordingly:

If you're using Git then enable the 'This build is parameterized' with the 'String parameter' option in the source job. Add String Parameter settings as follows:

Then adjust the 'Branches to build' SCM settings:

If you're using Subversion instead then enable the 'This build is parameterized' with the 'List Subversion tags (and more)' option in the source job. An example configuration looks like:

DONE! Now you should be able to choose the branch that should be used for building the Debian source package.

Additionally to building Debian package based on a specific branch, you might want that built packages are put in a branch-based repository as well. To achieve that, start with adjusting the Artifact Deployer-Configuration like this: 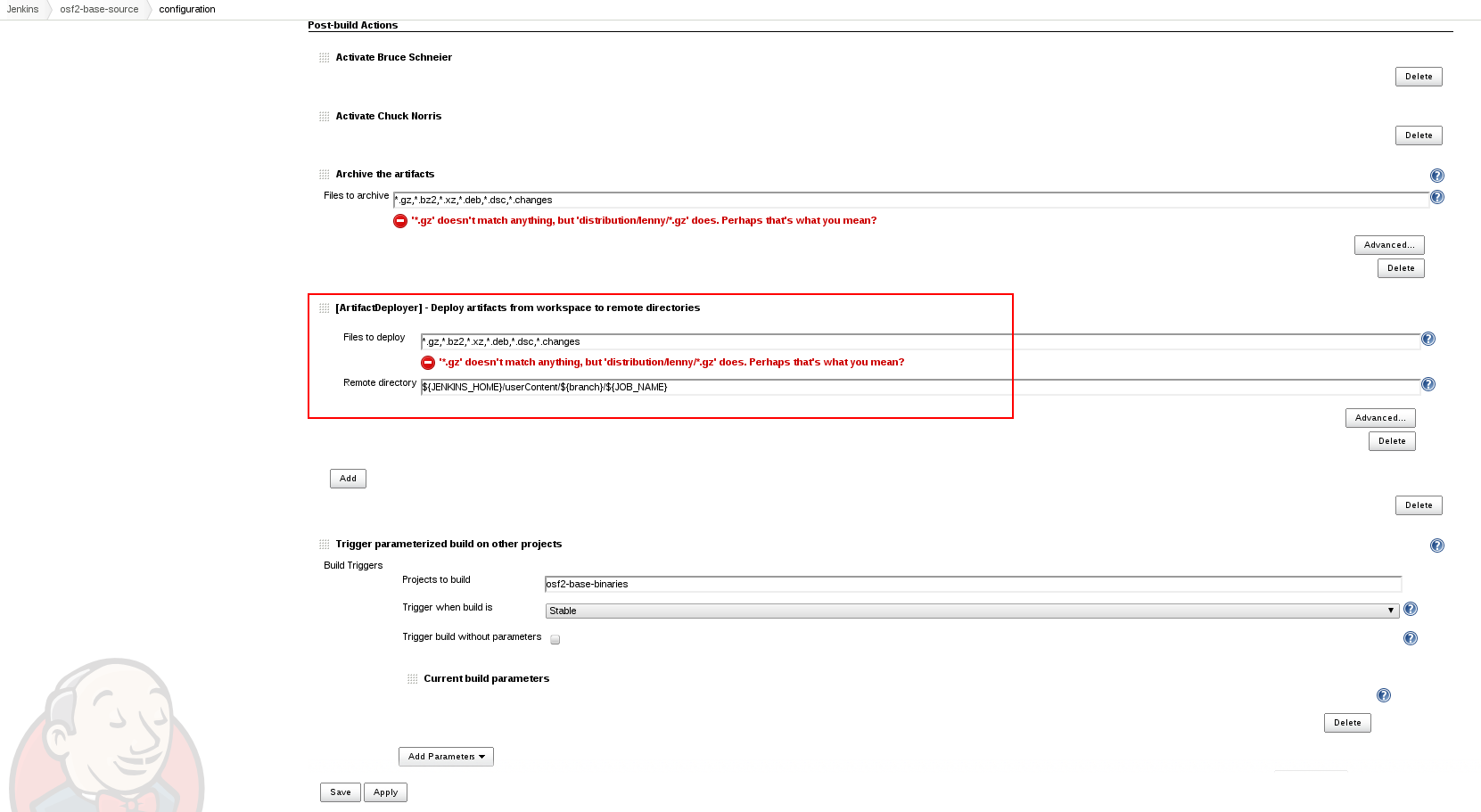 You should also choose "Trigger parameterized build on other projects" and add "Current build parameters" to the parameters. This will make sure, that the chosen branch is passed to the binary job. You can remove the usual "Build after other projects are built" trigger.

Next, proceed with the binary job. Start making it parameterized and accepting the branch parameter as done in the source job.

Now edit the build commands to be as following:

Thats it. If you now trigger a build for your source job, it will ask your for the branch and will put the resulting binaries and sources into a branch-specific repository.

Purpose of the scripts

The following scripts are provided by jenkins-debian-glue:

jenkins-debian-glue and its scripts can be customized mainly through several environment variables.

You can either set environment variables system wide or inside Jenkins jobs (use export VARIABLE=SETTING in the 'Execute shell' step accordingly).

The following settings are supposed to be configured in /etc/jenkins/debian_glue:

The following settings are supported by build-and-provide-package:

The following settings are supported by generate-git-snapshot:

The following settings are supported by generate-reprepro-codename:

The following settings are supported by generate-svn-snapshot: