Setting up those jobs is really simple. Just follow the following steps and you should have a working system in less than 20 minutes.

The Copy Artifact Plugin (install it via http://$JENKINS_SERVER/pluginManager/available or through the jenkins-cli.jar's install-plugin option on the command line) provides the option to deploy artifacts from the source job to the binaries job. Make sure it's installed so you get the "Copy artifacts from another project" option as Build step, used in the following steps.

The Jenkins Workspace Cleanup Plugin provides the "Delete workspace before build starts" option which is useful for getting rid of files from previous runs.

Make sure the Git Plugin is installed in Jenkins. On the build system you need git-buildpackage and a basic Git configuration for the user under which Jenkins is running (usually being 'jenkins'):

Then either adjust the "Git plugin" settings at http://$JENKINS_SERVER/configure or manually execute:

The "Subversion Plugin" is shipped by Jenkins out of the box nowadays, but to use it with Debian packages please make sure you've subversion-tools available on the build system:

Create a new job using the 'Build a free-style software project' option in Jenkins. Use jenkins-debian-glue-source for the job name. Then enable and configure 'URL of repository' of the according version control system under 'Source Code Management' to automatically check out sources.

In the "Build" section add a build step "Execute shell" as follows to get rid of files from previous runs without removing the VCS checkout:

Notice: the "Delete workspace before build starts" option provided by the Jenkins Workspace Cleanup Plugin works as well, though it also removes the repository checkout so build time might increase. Identify what you want and choose on your own.

Then add another build step of "Execute shell" as follows:

Enable "Record fingerprints of files to track usage" and its "Fingerprint all archived artifacts" setting:

Enable "Build after other projects are built" under Build Triggers and choose the name of the source job, being jenkins-debian-glue-source in this example:

Under Configuration Matrix create a user-defined Axis titled "architecture" specifying the architectures your Debian packages should be built for. If you're running an amd64 system (recommended nowadays) then amd64 should be your default choice no matter what. If you also want to build Debian packages for i386 then add i386 (separated by whitespace from 'amd64'):

Choose "Run each configuration sequentially" and in the Build Environment section enable the "Delete workspace before build starts" option (provided by the Workspace Cleanup Plugin):

Notice: once you're building for multiple architectures or distributions you might also want to enable the option 'Execute touchstone builds first'.

In the "Build" section configure the build step "Copy artifacts from another project" as follows: 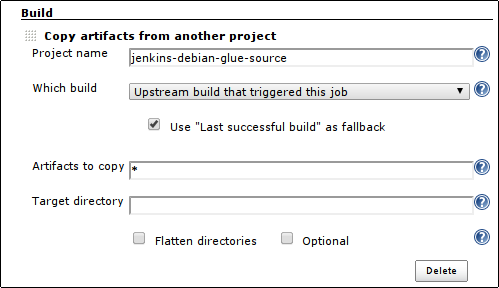 To be able to execute cowbuilder as user jenkins install a file into /etc/sudoers.d/jenkins (file permissions 440 recommended) containing:

The second line makes sure that DEB_* and DIST environment variables are propagated to cowbuilder.

Lintian dissects Debian packages and tries to find bugs and policy violations. It contains automated checks for many aspects of Debian policy as well as some checks for common errors which turns out to be very useful for inclusion in Continuous Integration/Delivery infrastructures.

and add lintian.txt (no it's not a typo) to the list of artifacts to archive.

Enable the 'Publish JUnit test result report' Post-build action and select **/lintian.xml for the files to report.Then you should get test reports for your Debian packages based on lintian's output.

Once the jenkins-debian-glue-binaries Jenkins job has finished as well you should have two Jenkins jobs marked as blue (AKA success):

Problems? Check out the build console log which should be available at http://$SERVER_IP:8080/job/jenkins-debian-glue-binaries/architecture=amd64/lastBuild/console

Well done - that's it! You have your own Debian packages of jenkins-debian-glue now.